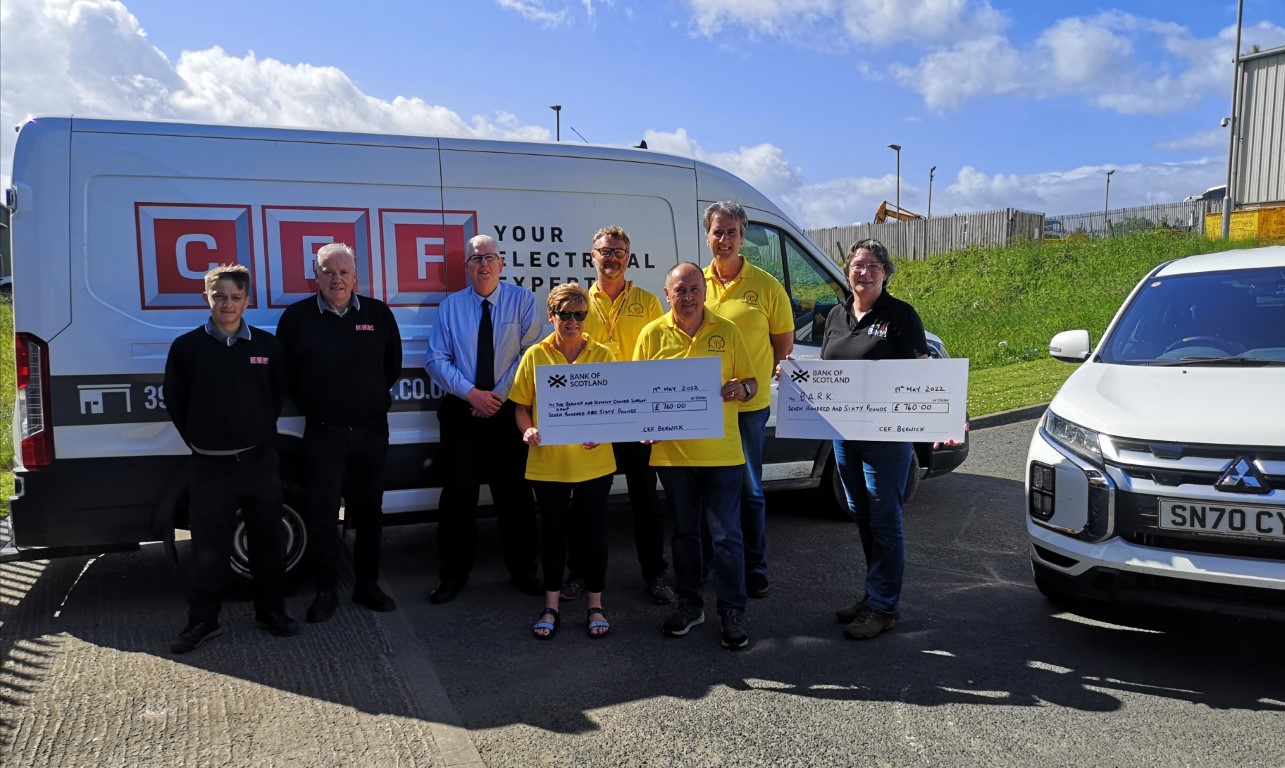 On 19th May 2022, our good friends at CEF – City Electrical Factors based at the Berwick Ramparts, kindly hosted another one of their popular and successful “Calibration & Trade Day” events. A prize giving event, with fantastic prizes so kindly donated by local businesses, took place on the day to raise funds for Berwick Cancer Cars and BARK Berwick Animal Rescue Kennels.

In total the CEF team raised well over £1500. BARK Kennel Manager, Jan Ross and Berwick Cancer Cars representatives Joy Cowan (Fundraising Coordinator), David Cowan (Treasurer), Roger Peaple (Media, Driver) and Ian Beresford (Driver) met with CEF Berwick branch manager Mark Robertson and two of his team, Sam and Kenny, for a special cheque presentation with Cancer Cars car ‘Carol’, each charity receiving an amazing £760. Brilliant support shown once again to Berwick based charities from Mark Robertson and his team at CEF. Huge thanks to all those who donated to the prize giving event and who went along to support the event.

Many thanks to Aaron Jamieson for so kindly taking the main group picture.

More Of Our Supporters

We use cookies on our website to give you the most relevant experience by remembering your preferences and repeat visits. By clicking “Accept All”, you consent to the use of ALL the cookies. However, you may visit "Cookie Settings" to provide a controlled consent.
Cookie SettingsAccept All
Manage consent

This website uses cookies to improve your experience while you navigate through the website. Out of these, the cookies that are categorized as necessary are stored on your browser as they are essential for the working of basic functionalities of the website. We also use third-party cookies that help us analyze and understand how you use this website. These cookies will be stored in your browser only with your consent. You also have the option to opt-out of these cookies. But opting out of some of these cookies may affect your browsing experience.
Necessary Always Enabled
Necessary cookies are absolutely essential for the website to function properly. These cookies ensure basic functionalities and security features of the website, anonymously.
Functional
Functional cookies help to perform certain functionalities like sharing the content of the website on social media platforms, collect feedbacks, and other third-party features.
Performance
Performance cookies are used to understand and analyze the key performance indexes of the website which helps in delivering a better user experience for the visitors.
Analytics
Analytical cookies are used to understand how visitors interact with the website. These cookies help provide information on metrics the number of visitors, bounce rate, traffic source, etc.
Advertisement
Advertisement cookies are used to provide visitors with relevant ads and marketing campaigns. These cookies track visitors across websites and collect information to provide customized ads.
Others
Other uncategorized cookies are those that are being analyzed and have not been classified into a category as yet.
SAVE & ACCEPT
Scroll To Top