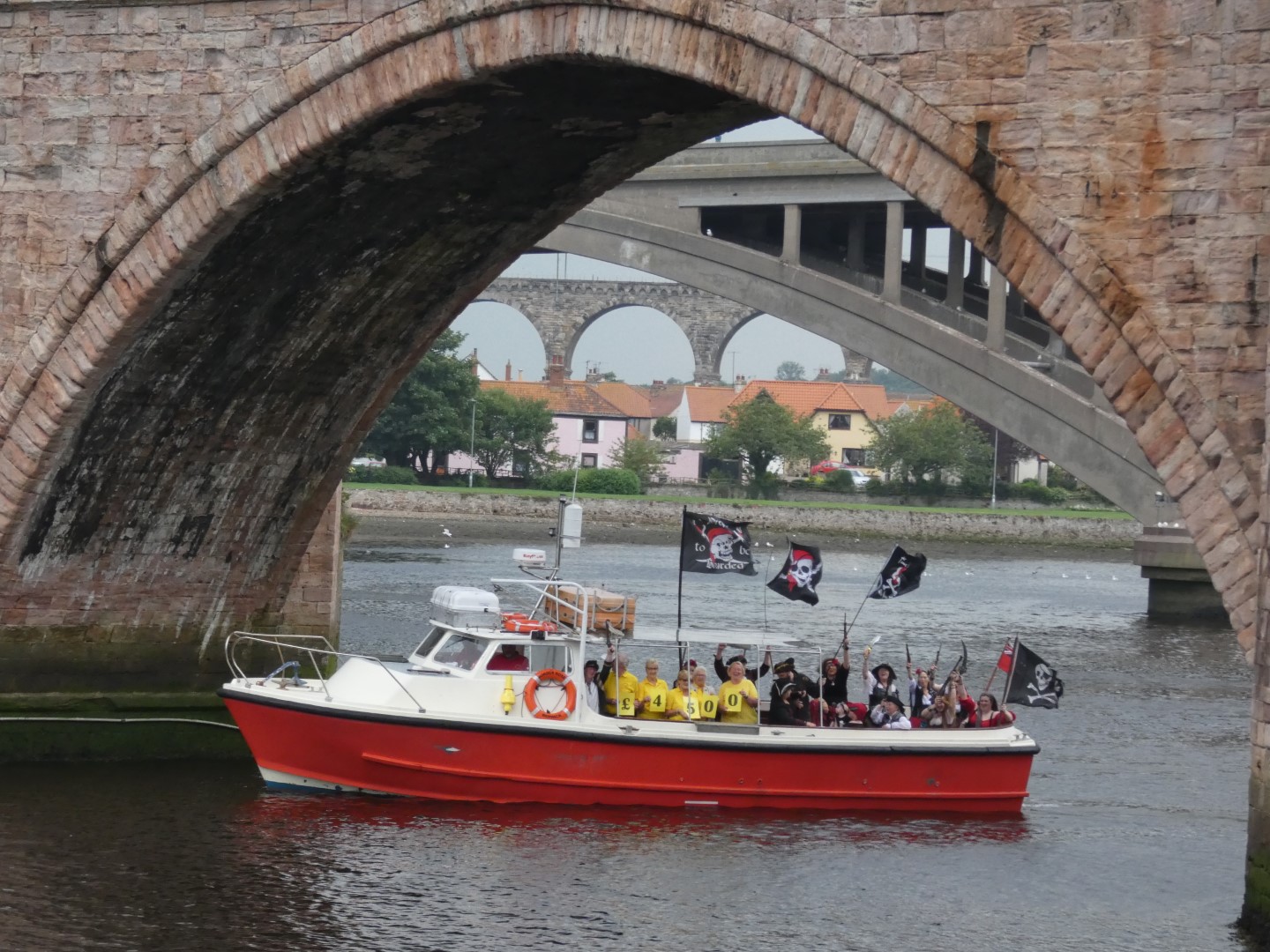 We thank the Pirates for their continued support, friendship and comraderie they create in all they do. The money you raise for us continues to help so many local people to get to their Cancer related appointments.

Organised by Plundering Pirates of the North East, The 8th Midsummer Mutiny for Plundering Pirates kicked off on Thursday 19th June 2019 at the regular venue of Berwick Rugby Club. The first evening revolved around a barbeque and a few drinks in the campfield followed by a guitar singalong.

Friday afternoon saw the crew head across to Holy Island, with the Crown and Anchor beer garden providing a perfect setting for the afternoon with it’s view over the harbour and castle. Music was provided by Dancing With Ghosts and Heyzeus until the turning of the tide dictated that the crew returned to the mainland. Once back on site, the official opening ceremony was performed with one of the younger pirates unfurling the sail and declaring the Mutiny “ready to sail”. All trooped inside the venue for local band Ripple, who played a mixed set including the Mutiny anthems. Centre of the dancefloor was then taken by the Luna Nigra Tribal Dancers, who performed an original routine named Freak Show, involving a bearded lady, snake handlers, cutlass wielding and much more. The next music act followed, this being Gunpowder, a York based 5 piece playing a set of explosive hits. After a brief break for a raffle and bottle roll, the night’s headliners took the stage, this being the Tyneside band Kiss Me Deadly, back by popular demand after their Mutiny performance last year. Their set of rock covers rounded the night off a treat and the weary pirates headed to the campfield.

Saturday daytime was spent on site with archery and sword tuition being options for the more energetic whilst three of the louder pirates managed to raise over six hundred pounds by an unusual method. They were all sponsored to remain silent for an hour! Late afternoon saw a pirate wedding take place with the Mutiny captain finally making an honest woman of his wench of forty years. This led naturally into the night time celebrations, with 13 Tombs from Fife kicking off with some punkabilly, and the Luna Nigra Dancers performing a more traditional routine, incorporating both pirate and Scottish themes this time. A Mexican electronic rock fusion band, Zenith Nadir, then had the dancefloor jumping to some more unusual sounds, followed by a couple of fundraisers and a birthday celebration performed on the bagpipes. The night was then rounded off by The Breakfast Club, a top rated band from Tyneside who performed a string of hits.

Sunday saw the dismantling of the pirate camp as crew members left for home, some local, others Tyneside, Durham, Yorkshire, Surrey, Northern Ireland and, of course, Scotland being their destinations.

Plundering Pirates of the North East would like to thank Berwick Boat Trips for the use of their boat in handing over the money to the charity. They also wish to thank this year’s Mutiny sponsors, No1 Woolmarket vintage store, Hop & Bottle Craft Beers, Boch and Bumbles Barbers, Jim Youngman Carpets, R. G. Foreman butchers and the Crown & Anchor on Holy Island. On that note, the pirate mutiny committee are looking for other small sponsors to enable next year’s event to go ahead. They can be contacted via their Facebook page HERE.

The Plundering Pirates of the North East