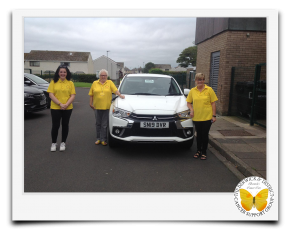 Working Alongside Our Local Community, Capturing Treasured Memories For Our Future Generations

Lead by Sandi Henderson, our team of Committee Members, Freya, Joy, Shona and Tom, visited the first of 12 schools and community organisations to collect their Time Capsules.

Posted in Our News

Some of our other news 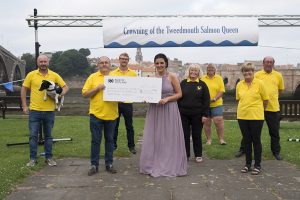 Tweedmouth Salmon Queen 2019 and 2020 – Freya Weatherley-Ryan was crowned Tweedmouth Salmon Queen in 2019, retaining her reign the following year due to the restrictions of the Covid-19 pandemic which didn’t allow the 2020 ceremony to take place. We were so honoured when Freya nominated The Berwick & District Cancer Support Group as her… 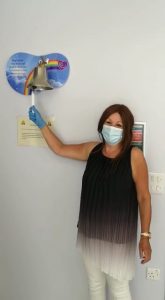 Julie ‘Rings The Bell’ at Freeman!

RINGING THE BELL At the end of treatment it has become a milestone to ‘ring the bell’. As you can imagine it is quite an emotional moment. One of our clients, Julie Neil has given us permission to share her ‘ringing of the bell’ at Freeman Hospital earlier today.Thank you for sharing this with us…

Working Alongside Our Local Community, Capturing Treasured Memories For Our Future Generations

A Berwick Cancer Cars Committee initiative to provide our local schools and community care organisations with Time Capsules. Lead by Sandi Henderson, our team of Committee Members, Freya, Joy, Shona and Tom, visited the first of 12 schools and community organisations to collect their Time Capsules. Many thanks to all the headteachers, staff and pupils… 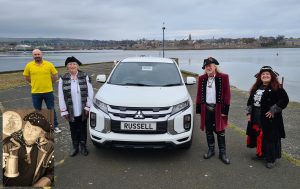 When it comes to naming our cars, we take great pride in being able to choose a name fitting to honour, appreciate and sometimes to remember our fantastic supporters and fundraisers. On Saturday we took delivery of our latest fleet member ‘Russell’. Named in memory of Russell Toward who sadly, recently passed away. Russell was… 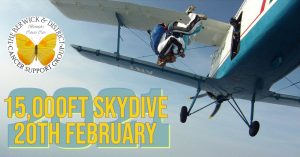 Our very own daredevil Berwick Cancer Cars Youth Ambassador, and youngest Committee member, Freya Ryan, has signed up to do a tandem parachute jump, from 15,000ft!! It’s to take place on 17th April 2021 and Freya is doing this as part of her continuous fundraising efforts in her role as Tweedmouth Salmon Queen, which she… 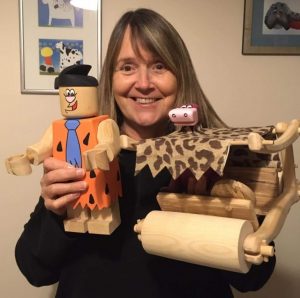 Our online raffle draw winners with their hand crafted, one of a kind Flintstone inspired prizes! Thank you to Steve Bird for his brilliant Fred and Dino wooden creation and for Suzanne at Quay Interiors for the super finishing touch car fabric, and for so kindly displaying Fred and Dino in her shop window on…

Imagine our surprise and delight when we were contacted by one of our clients, Betty Green, telling us she’d entered Berwick Cancer Cars into the 2020 North East Charity Awards as ‘Small Charity of the Year’. Fast forward several months during a particularly troublesome year, whilst we all made huge adjustments to our daily lives… 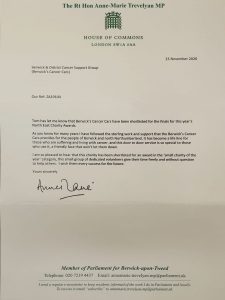 Letter of Support from our MP

Prior to the North East Charity Awards we were contacted by our MP for Berwick-upon-Tweed, Anne-Marie Trevelyan, with a letter wishing us good luck. We would like to thank Anne-Marie and her Chief of Staff Tom Forrester for their support and kind words, it meant so much for us to be acknowledged in this way.

Shortlisted for ‘Small Charity of The Year 2020’

We are absolutely thrilled to have been chosen as a shortlisted finalist as ‘Small Charity of the Year’ in the prestigious 2020 North East Charity Awards. The Awards are designed to recognise the hard work and innovative thinking by charities and individual fundraisers across the whole of the Northeast. As with many events, this year’s… 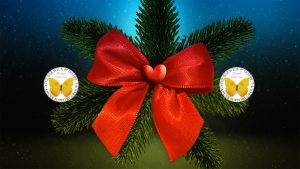 Each year our good friends at Tweedmouth Co-op Funeralcare set up a Christmas Tree and invite people to place a paper bauble on the tree to remember our loved ones no longer with us. It’s a beautiful way to show our memories at this time of year. For 2020, and with everyone’s safety of uppermost…